Don’t look for some weak-kneed Ayn Rand or her shrugging Atlas here! Even H.G. Wells’ Dr. Moreau would have a hard time recognizing his own island in this bizarre mashup. Shipwrecked in the Atlantic, therapist Edward Prendick is rescued only to find himself stranded on an island populated by Jayne Grind, the patron saint of selfishness, and her fellow Deserters–those who’ve deciphered the clues in her landmark novel (Onan Pulled Out) and abandoned productive society to join her. Continuing her lifelong quest to rid man’s mind of altruism once and for all, Jayne has begun a series of horrific experiments–the kind that leave her Deserters far worse off than her novels ever did. Trapped and bewildered, Edward must fight for survival as Jayne Grind’s selfish utopia begins to fall apart. 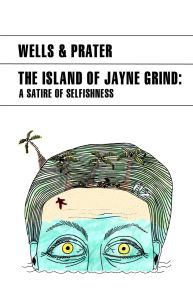